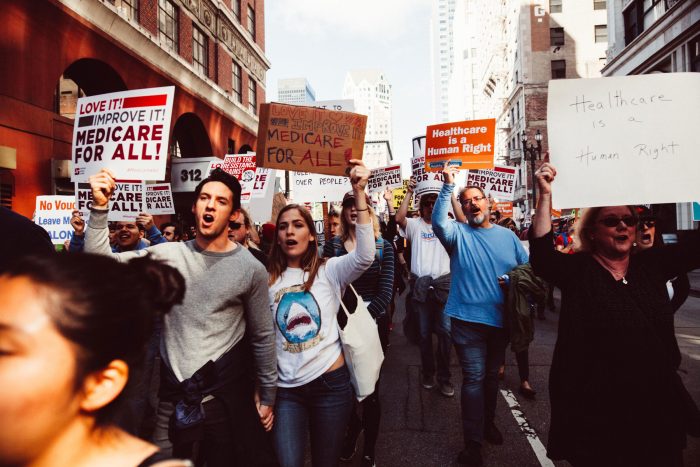 A recent article from Truthout emphasizes the critical need to make "links to labor struggles by health care workers — and bringing unions into the grassroots campaign for Medicare for All." The original piece can be found here.

Under capitalism, the 1 percent profits from the illnesses of the 99 percent.

Though it is lost on most mainstream commentary about the health care system, the reality is that the wealth and power of a small group of people depends on other people being sick — and on rationing and restricting their access to quality health care.

This is the reason for the daily reality of working class and poor people skipping medications, going to work sick or missing appointments because they simply cannot afford to be ill.

So it’s no wonder that the proposal for a Medicare for All system — in which the government health care program for older Americans would be expanded to cover all ages — is widely popular. In Congress, a new Medicare for All caucus has at least 70 members, including Democrats who aren’t known for being on the left-most edge of the party.

Like the calls to abolish ICE, Medicare for All is no longer a fringe movement — which is welcome news to health care activists who have been fighting for decades for a more just, equitable system that prioritizes patients before profits.

But there’s another promising development for the Medicare for All movement: The recent strikes and struggles of nurses — including an expected weeklong walkout in Providence, Rhode Island this week by 2,400 nurses at Rhode Island Hospital and Hasbro Children’s Hospital — are emblematic of a larger fightback within the US health care system by the people whose labor makes it run.

Stay in the loop

Never miss the news and analysis you care about.

The neoliberal attacks on the working class and the poor in the US have resulted in a health care industry that is worth nearly $3 trillion and a system where annual spending on health care is well over $9,000 per person — more than twice the amount in other advanced economies like Japan and the United Kingdom.

Needless to say, this is a lucrative business, and hospital administrators and health insurance bosses won’t simply walk away from it.

Health care workers are very familiar with the consequences of an outrageously expensive and shockingly ineffective system.

The lack of access to affordable quality primary care means that workers and the poor often skip medicine doses or regular check-ups, which leads to more costly emergency room visits — and these in turn often extend into hospital admissions and skyrocketing bills.

The deadly cycle doesn’t end there: As a consequence, nurses are thenasked to care for more patients than is safe, which leads to longer and costlier hospital stays, more falls, missed medication, errors and worse.

What this means is that the fight for Medicare for All is literally a fight for our lives. But more immediately, the struggles of union nurses to win safe patient-to-nurse ratios and improved working conditions can be directly tied to winning a Medicare for All system.

Many health care unions, like National Nurses United, have recognized the importance of the fight for single-payer health care, though other unions need to go further than they have.

The AFL-CIO passed a resolution in support of Medicare for All last October, and nearly 650 local unions have signed on as supporters of a single-payer health care system. But there has been little in the way of labor mobilizations to attach action to these resolutions — thus rendering them as well-meaning letters of intent.

The importance of the health care issue for unions is even more obvious when you look at how many labor struggles now involve companies attempting to push the cost of health coverage more and more onto workers.

For example, this spring’s “red state” rebellion of educators was sparked not only by low salaries and cuts in school funding, but the skyrocketing cost of health insurance. The average annual cost of health insurance premiums for primary, secondary, and special education teachers is $7,174. according to 2017 data from the Bureau of Labor Statistics.

In West Virginia, teachers won their demand for a 5 percent wage increase for all state workers, but they are still fighting for adequate funding for the Public Employees Insurance Agency that provides their health coverage.

The teachers’ struggles hold another lesson for all unions, including health care unions: The strike is a weapon we can use to fight cuts in wages and health care — and our side can win if we use it.

Earlier this month, House Democrats announced a new slogan for the 2018 midterm elections: “For the people.”

Though they caught grief from all sides, this could represent a shift for Democrats — at least a rhetorical one. Their main appeal before this has rested on an anti-Trump message of “We’re not them,” which begs the question of what the Democrats are for.

Supposedly, the “For the people” slogan is supposed to help the partyplace an increased focus on three key areas: addressing rising health care and prescription drug costs; increasing wages through infrastructure and public works projects; and highlighting Republican corruption in Washington.

The Medicare for All caucus, led by Reps. Pramila Jayapal of Washington, Debbie Dingell of Michigan and Keith Ellison of Minnesota, is another sign of the times.

The caucus could grow further from the ranks of the 123 House Democrats — nearly two-thirds of the total — who are co-sponsors of Expanded and Improved Medicare for All Act (known as HR 676), which is now sponsored by Ellison, taking over from former Rep. John Conyers.

It isn’t hard to see why Democrats would want to attach their name to the Medicare for All issue. A March 2018 Kaiser Family Foundation poll found that nearly 60 percent of people favor a single-payer system. Some Democratic candidates are making single-payer a central feature of their campaign — and winning.

At this point, however, it’s still easy for Democrats to say they support Medicare for All, but do nothing at all about it. Putting pressure on Democrats to do something more than co-sponsor legislation they don’t expect to pass will be necessary.

At the grassroots level, the Democratic Socialists of America have madedoor-knocking campaigns to talk to people about single-payer a major part of the organization’s activity. In states like California, this has gone along with canvassing for state-level Medicare for All legislation.

One critical area for health care activists, though, is making links to labor struggles by health care workers — and bringing unions into the grassroots campaign for Medicare for All.

Recent strikes and struggles by nurses show that action can win our immediate demands and advance the fight for genuine health care reform.

In June, the Massachusetts Nurses Association (MNA) at Baystate Franklin Medical Center in Greenfield finally won an 18-month struggle for a new contract that included two strikes and subsequent lockouts. The new agreement meets almost all of the nurses’ demands, including no cuts in health insurance, a better wage increase and multiple provisions to maintain safe staffing.

Earlier this month, 1,800 members of the Vermont Federation of Nurses and Health Professionals (VFNHP) went on strike for two days against the University of Vermont Medical Center (UVMMC) system. The nurses are fighting for a significant pay increase to make up for being some of the lowest-paid nurses in the region, plus other measures to maintain safe staffing.

The walkout was solid among union members, and the two days featuredan amazing show of solidarity from the community, from hospital patients pushing IV poles on the picket line to UPS drivers refusing to deliver packages.

This week, 2,400 members of United Nurses And Allied Professionals (UNAP) Local 5098 are on strike in Providence against Lifespan, the largest hospital system in Rhode Island, with more than $2 billion in annual operating revenues.

Lifespan management is offering significant pay increases over three years going to nurses with less than 10 years of service, but only a 6 percent hike for veteran nurses. The newer nurses haven’t had a cost-of-living adjustment in eight years. The union is calling for a 12 percent across-the-board raise for all union members.

In light of these struggles, it is obvious that there is common ground among the nurses’ struggles for workplace dignity and patient safety and the fight for Medicare for All. Nurses’ labor struggles shouldn’t be juxtaposed to the important work that grassroots activists are engaged in, but connected and integrated with them.

As fellow nurse Elizabeth Lalasz and I wrote in Socialist Worker last year:

[T]he growing organization and militancy of the heath care workers, particularly nurses…have the power to both win better care for their patients on a local level and be the driving force for a national health care reform movement…

Organized nurses have tremendous potential to use collective action to win improved staffing and safety for themselves and their patients, as well as improved wages and benefits. Hospital corporations are well aware of this, of course, and many have gone on the offensive in recent years against their employees…

What gives nurses a potential advantage over many other workers is that health care is a highly politicized industry. Strikes by nurses and other hospital workers can shine a light on the miserable conditions being created in hospitals every day by the for-profit health care system — and rally public support both for the strikers and for larger reform.

Rank-and-file nurses and health care workers have unique role to play — one that raises the question of mobilizing workers’ power behind a demand to transform the health care system.

This has immense potential for the left because it is an example of workers democratically defending our rights in the workplace — pressuring politicians to do more than talk about the need for a Medicare for All system.

We are already paying more -- more than twice as much per capita -- on healthcare as the average developed country for a national healthcare program, but without getting any of the benefits.